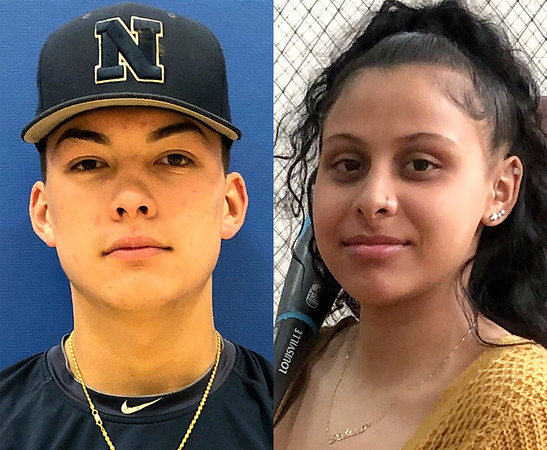 As local teams look to chase conference titles or solidify themselves within the state tournament picture, clutch individual performances will be a key factor. Whether it comes from a usual suspect or a surprising contributor, coaches will take whatever they can get as games begin to carry more tension.

Two area teams received big individual performances last week, and are sitting pretty for postseason success because of it.

Newington’s Gunnar Johnson and New Britain’s Nataly Hernandez are the New Britain Herald Athletes of the Week for helping their teams enjoy successful weeks heading into some of the most important games of the season.

The Newington baseball team enters the new week with an impressive 11-4 record, and went 2-1 last week thanks to the stellar play of its star catcher in Johnson. Through three games over a seven-day span, Johnson smacked seven hits in 11 at-bats, including two doubles and 7 RBI.

“Gunnar is an All-State catcher, and one of the best players in the CCC, hands down,” Newington head coach Ben Alaimo said. “I’d put him against anybody. I’m so thankful I’ve had the opportunity to coach him for the past three years, and to have him for one more year.”

Johnson has picked up right where he left off as a sophomore, when he earned All-State honors thanks to a memorable season at and behind the plate. In the Indians’ first two contests last week, Johnson drove in three runs in each game to help Newington coast to a pair of lopsided wins. When the Indians met a much more formidable opponent in Platt on Friday, Johnson went 3-for-4 with an RBI, doing everything he can to lead Newington to victory, though the Panthers eventually prevailed 7-3.

That appears to be an understatement. On top of Johnson being an absolute nightmare for opposing pitchers, he has also caught an Indians pitching staff that has allowed more than three runs in a game just three times all season, and has recorded six shutouts so far. Newington boasts a solid group of pitchers, but it helps having a top-tier catcher behind the plate.

So far this season, there hasn’t been much negative that Johnson has had to prevent from carrying over. In his first year as an upperclassman, Johnson has shown his leadership value with his stellar numbers at the plate, and with the way he handles his pitching staff. For a team that plans on making a run in the state tournament, having a reliable catcher should go a long way.

The New Britain softball team hopes to win some games come state tournament time as well and it made a statement on Friday night with a 6-3 win over Berlin, marking the first time ever that the Hurricanes took down the Redcoats. New Britain, now 11-5, has turned a four-game losing streak into a six-game winning streak, thanks in large part to first-year left fielder Nataly Hernandez.

Looking to make history against Berlin, Hernandez ripped a pair of triples that helped give the Hurricanes a 6-1 lead. After smacking an RBI triple in the fourth, Hernandez stepped up to the plate with the bases loaded in the sixth, with New Britain looking for some much-needed insurance, ahead just 3-1.

“When she was on deck, I told her to be hungry,” New Britain head coach Joel Simmone said. “She stepped in and ripped a triple to clear the bases. That kind of put the game on ice.”

Hernandez’s stand-up triple to right center field gave the Hurricanes a cushion that was desperately needed, as Berlin pushed across two runs in the seventh before New Britain closed out a 6-3 win, with four of the RBI coming from Hernandez, who has come through in the clutch multiple times this season.

“She played JV last year,” Simmone explained. “It was tougher for her to crack the lineup, but she’s a great athlete. She works her butt off. She’s a .300 hitter and probably has the best outfield arm on the team. What a pleasant surprise.”

Hernandez and the Hurricanes will spend the next two weeks looking to secure the best regular season finish in program history, and as long as Hernandez continues to show the type of production she flashed last week, more history would appear to be in reach.

Ryan Chichester can be reached at (860) 801-5094 or rchichester@newbritainherald.com