Griffin, Makurat each struggle in debuts for UConn women's basketball 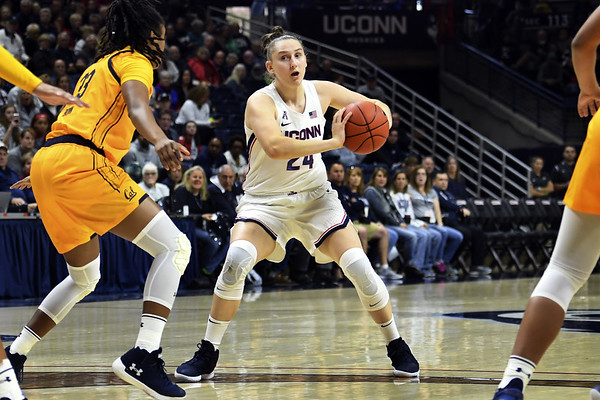 Connecticut's Anna Makurat (24) looks to pass during the first half of an NCAA college basketball game against California Sunday, Nov. 10, 2019, in Storrs | AP Buy this photo
Published on Monday, 11 November 2019 20:43
Written by CARL ADAMEC

The duo would go on to become the highest scoring classmates in NCAA history.

So one game does not make a career. For Huskies’ freshmen Aubrey Griffin and Anna Makurat, better things, they hope, are ahead after their regular season college debuts on Sunday were not dreams come true.

Each scored just one point, with Makurat missing two 3-pointers and Griffin having her only shot blocked in No. 5 UConn’s 72-61 win over California at Gampel Pavilion.

“Anna and Aubrey have really struggled the last couple of days,” UConn coach Geno Auriemma said. “I don’t know if it’s nerves leading up to the first game. I don’t know.”

“I thought Anna would cry if I started her, so I tried to make her feel a little bit better,” Auriemma said. “She’s been in a daze the last couple of days. I’m not sure what’s going on in her mind. I’m going to have to have a talk with her (today).”

Makurat and Griffin were the only substitutes Auriemma used. UConn’s three returning starters - Crystal Dangerfield, Christyn Williams, and Megan Walker - along with Olivia Nelson-Ododa combined to take 62 of UConn’s 65 shots from the floor and scored 70 of its 72 points.

It could have been worse. The last time the Huskies opened the season with the Golden Bears was 28 years ago, and that game marked the debuts for Rebecca Lobo and Pam Webber. Each scored 10 points in a loss at Berkeley. Three seasons later, their last game was a win that gave UConn its first national championship.

One of the most remarkable streaks at UConn continued Sunday as the Huskies made it 962 consecutive games without back-to-back losses. The last time they lost two in a row was in March 1993, when they fell to Providence in the Big East Tournament semifinals and to Louisville in the NCAA Tournament first round.

Sunday’s win pushed UConn’s record to 61-0 following a loss since the start of the 1993-94 campaign.

The Huskies also made it 24 consecutive season-opening wins dating back to an overtime loss to Louisiana Tech in the Hall of Fame Tipoff Classic in Knoxville, Tennessee, on Nov. 19, 1995.

And Auriemma kept a streak alive with the win against the Golden Bears and first-year coach Charmin Smith, who took over when Lindsay Gottlieb left for an assistant’s job with the NBA’s Cleveland Cavaliers. The Hall of Fame coach’s team has not lost a game to a team coached by a non-interim first-year head coach since Dec. 28, 1986, when John Miller’s La Salle club beat the Huskies 65-60 in the La Salle Invitational.

UConn travels to Nashville next for Wednesday’s contest against Vanderbilt and a homecoming game for Murfreesboro, Tennessee, native Dangerfield.

The Huskies won the 2014 national championship in Nashville but those games were played at Bridgestone Arena. UConn lost its only other game at the Commodores’ Memorial Gym on March 21, 1992, 75-47, in NCAA Tournament East Regional second-round play. Out of the Huskies’ 141 NCAA Tournament contests, it remains their only true road game as they were a No. 6 seed to Vanderbilt’s No. 3.

What makes Memorial Gym unique is the teams’ benches are on the baseline and not on the sidelines.

“Talk about weird, that will be weird,” Auriemma said. “That’s a different environment when you’re playing down there. I’ve only been there once. It’s not normal when you’re standing in the end zone watching what’s going on. The court is a little elevated. It’s different from what you see anywhere else.”

Irwin started games against Saint Louis and Seton Hall last December when Walker was sidelined with strep throat. … The freshmen were the only substitutes that Auriemma used as graduate transfer Evelyn Adebayo and senior Molly Bent did not play. Bent had seen action in the last three season openers.