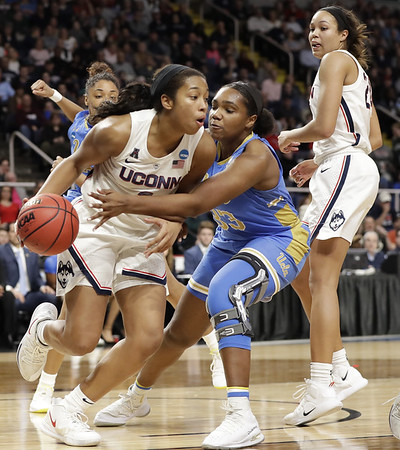 STORRS - Geno Auriemma knows the team he's putting on the floor this season, with no returning All-Americans, isn't the best he's ever had at UConn.

But the Hall-of-Fame coach, who is entering his 35th year at the school, says the Huskies still have a goal of winning a 12th national title.

The Huskies have lost in three consecutive national semifinals after winning four straight NCAA championships. They start this season with plenty of questions, including who will provide the scoring.

When Napheesa Collier (20.8 points per game) and Katie Lou Samuelson (18.5) graduated to the WNBA in the spring, they took with them 47% of the Huskies offense.

Auriemma said that means more opportunities for former role players to step up.

“The good thing about it is they are starting to realize that no one person has to be superstar material,” Auriemma said. “They just have to rely on each other and be really, really good as a team.”

Here are some things to watch this season, the final for UConn in the American Athletic Conference before rejoining some old rivals in the Big East:

The Huskies will be led by senior point guard Crystal Dangerfield, who averaged just over 13 points and just under six assists as a junior. Junior Megan Walker and sophomore guard Christyn Williams also return as starters.

“It's going to be a collective effort each night what we do on the floor as far as how we get our wins,” said Dangerfield, who returns after hip surgery kept her sidelined from basketball this summer. “But leading the charge, the three of us are going to have to be the ones to do that.”

Walker, who averaged 12 points as a sophomore, has made the biggest changes in the offseason, Auriemma said. The 6-foot-1 forward, a former national high school player of the year, has improved her body, her preparation and her focus, he said.

Center Olivia Nelson-Ododa also spent a lot of time in the weight room, preparing for more minutes in the post. The 6-5 sophomore's dunk was the highlight of the Huskies annual First Night preseason celebration for fans.

“Everyone is talking about our big three, but Liv is going to be a presence on the floor,” Williams said. “She's our big guy.”

UConn has added two freshmen, forward Aubrey Griffin and Anna Makurat, a guard played the last two years in a professional league in Poland. They also have two transfers, forwards Evina Westbrook from Tennessee and Evelyn Adebayo from Murray State. Westbrook, who averaged almost 15 points last season, is coming off knee surgery and awaiting word on whether she will be granted a waiver by the NCAA to play this season.

“Sending a waiver to the NCAA is like making a phone call or writing a letter to the DMV,” Auriemma said. “It's anybody's guess when you're going to get a response.”

The Huskies are 120-0 in AAC regular-season and tournament play. Dangerfield says the players take pride in that record and are determined to leave the league undefeated.

UConn opens the season on Nov. 10 at home against California. The Huskies non-conference schedule is again among the most competitive in the nation, including home games against Virginia, Notre Dame, Baylor, Tennessee and Oregon. They also face Vanderbilt, Dayton, DePaul, Ohio State and South Carolina on the road.

“All the big games, we live for that,” Williams said. “That's why we came to UConn.”