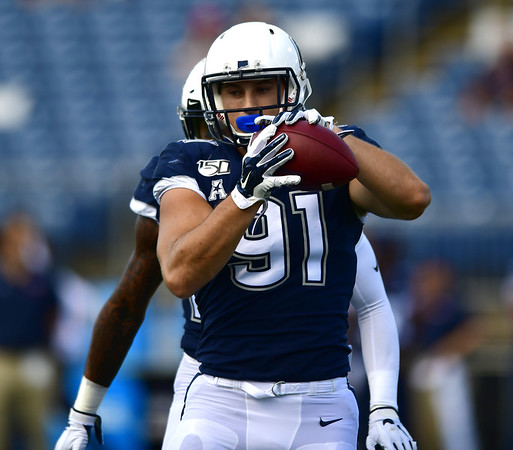 STORRS - UConn could be quite short-handed when it comes to tight ends on Saturday.

Junior Jay Rose did not practice earlier in the week as he recovered from an injury suffered in the Huskies’ football loss to South Florida three days earlier. Coach Randy Edsall does not discuss injuries but it appeared Rose may have suffered a concussion late in the game after absorbing a hard tackle.

Fellow tight end Donovan Williams has missed the last three games with another undisclosed injury. He did practice Tuesday, though the senior and former quarterback has practiced often in the last few weeks but still been held out of game action.

Rose has caught 13 passes for 124 yards so far this season.

Should both Rose and Williams be unable to play, Jayce Medlock would likely be the starting tight end.

Edsall says he has appreciated Medlock’s efforts but wishes the 6-foot-2, 225-pound freshman from DeSoto, Texas, could wait one more year before getting into games.

“He’s doing the best he can for a guy that shouldn’t be playing,” Edsall said bluntly. “When I say that, it’s not because of him. He’s working hard, he’s giving it everything he’s got. But he shouldn’t even be playing.”

ELI STILL IN IT

Eli Thomas’ playing career is over with the Huskies but he’s still a major part of the program. The senior linebacker, who suffered a stroke last season and was advised by UConn’s medical staff against playing football again, remains a team captain and major voice in the locker room and on the field for UConn.

Thomas’ athletic career at UConn might not necessarily be over, however. He tried out for coach Jim Penders’ UConn baseball team recently.

“I tried a little bit. I hadn’t swung a bat in four or five years,” Thomas said. “I hadn’t played since my sophomore year of high school.

“I love competing,” Thomas continued. “If it (my medical condition) was going to affect football, why not try this? I’m a competitor.”

Thomas isn’t assured of anything in regards to his collegiate baseball career but he’s not about to give up.

“If there’s another tryout, I’ll try out again. Why not?” Thomas said. “I might as well keep trying and if the opportunity presents itself, I’ll take it.”

Running back Kevin Mensah apparently suffered a minor injury in the Huskies’ loss to USF Saturday, too. The junior was in pads for practice Tuesday but did not participate fully, spending a portion of the workout riding a stationary bike instead.

Mensah has rushed for 398 yards and four touchdowns this season. In the USF game he surpassed the 2,000-yard mark on the ground and now has 2,004 rushing yards in his career. “I’m fine,” Mensah said after practice. “I’ve been getting treatments, whatever it takes.”