Southington softball moves on to CCC Semifinals with win over Wethersfield 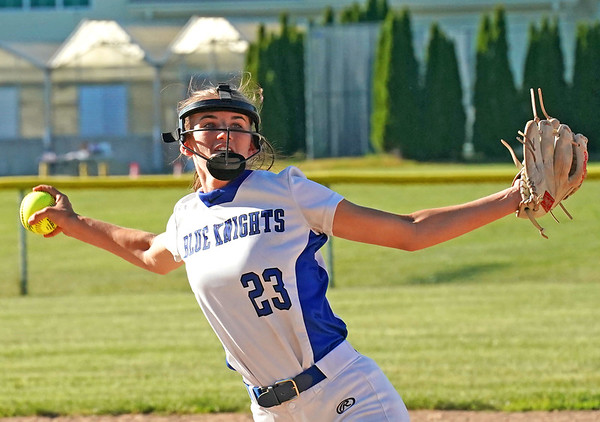 SOUTHINGTON – It was business as usual for Southington softball in its 10-0 win over Wethersfield during the first round matchup of the Central Connecticut Conference Softball Tournament on Thursday.

The Blue Knights’ exceptional pitching and powerful hitting put on a show once again as they claimed their 19th win in a row.

Southington starter Samantha Sullivan struck out the first five Eagles batters of the game, setting the tone for another dominant Blue Knights performance. Sullivan lasted five innings and struck out nine while only surrendering one hit.

“She looked great,” Southington coach Davina Hernandez said. “I thought Sam looked excellent today on the mound. I think she definitely could have gone the whole seven, but I wanted to rest her a little bit depending on what happens [Friday].”

“We definitely have pitching depth,” Hernandez said. “I think that really sets us apart from a lot of other teams. They’ve all been throwing really well in games, in practice against our own hitters, they all seem comfortable and confident going in, which is great.”

Offensively, Southington was very aggressive at the plate and it showed as six of the starting nine registered hits against the Eagles.

Verrilli paced Southington with a pair of RBIs while Rogers, Griffin, and Dominique Gaudio each brought in one run. Taylor Sullivan also concluded with a single for the Blue Knights.

After a scoreless first inning, Southington scored twice in the second, four times in the third and two more in both the fourth and fifth to run away with the victory.

The Blue Knights will face the winner of Bristol Central/Windsor on Friday.