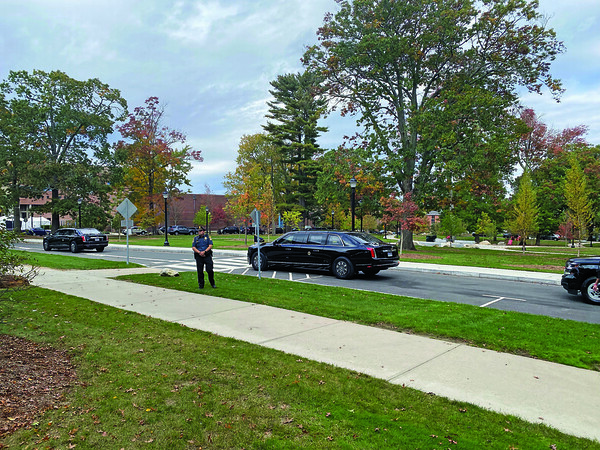 The motorcade taking President Joe Biden to the Dodd Center on Human Rights at the University of Connecticut campus makes its way through the Storrs campus. / Daniel Drainville | For the Chronicle. Buy this photo 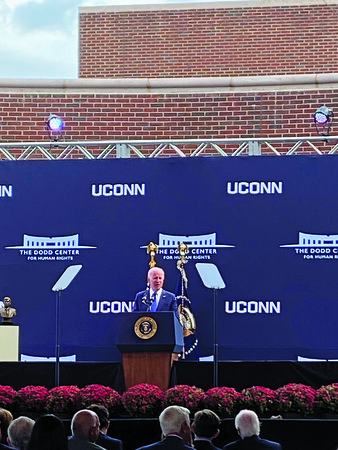 President Joe Biden speaks at the dedication of the Dodd Center for Human Rights on the University of Connecticut Storrs campus Friday. / Connor Linskey | Staff Buy this photo

President Joe Biden speaks at the dedication of the Dodd Center for Human Rights on the University of Connecticut Storrs campus Friday. / Connor Linskey | Staff Buy this photo

STORRS - The University of Connecticut campus was buzzing with activity Friday afternoon as President Joe Biden paid a visit.

This marked the first time since 1995 that a president made an appearance at the university.

The current president was in Storrs for a similar role.

Biden joined the former U.S. Sen. Chris Dodd and other dignitaries at UConn to mark the dedication of what is now called the Dodd Center for Human Rights.

The event Friday afternoon was titled “Human Rights for the Next Generation.”

Biden, Dodd and UConn Interim President Dr. Andrew Agwunobi were joined by UConn students, faculty and staff as well as members of the Connecticut congressional delegation, Gov. Ned Lamont and the UConn Board of Trustees.

The center was originally named for the late Thomas J. Dodd, a lead prosecutor for the International Military Tribunal at Nuremberg, which tried the Nazis after World War II.

“Tom Dodd dedicated his intellect and his moral passion and his resolute sense of right and wrong to making the Nuremberg war crimes trial a testament to justice,” Biden said. “Nothing like it ever happened before.”

Biden went on to say human rights, a concept that is so vital to the Dodd family, is of paramount importance to his administration as well.

“From day one of my administration, I’ve taken concrete steps to put human rights back at the center of our foreign policy and reassert our moral leadership on a global scale,” he said. “To lead with the power of our example, not the example of our power.”

He has been an advocate for human rights throughout his political career.

“The peace and security we all seek at home and abroad is rooted in the triumph of Democratic values and the rule of law,” Chris Dodd said during his portion of the program.

Chris Dodd worked with the university to conceive, fund and build the center to preserve and extend his father’s human rights legacy.

He noted Thomas Dodd advocated for the Nazi war criminals to have a fair trial, even though their crimes were horrific.

“That was, to some degree, the world’s introduction to America as a superpower and what we stood for,” Lamont said in his speech.

U.S. Rep. Joe Courtney, D-2nd District, acknowledged Chris Dodd for all he has done for eastern Connecticut, which comprises most of Courtney’s district.

“For those of us who live in this region, we know there is no better place than UConn for Chris Dodd’s work on human rights to be perpetuated,” Courtney said.

“His footprint in this part of the state, and I can attest to it personally, is wide and deep and today is another example of where that footprint gets deeper and wider for the people of the state of Connecticut.”

Biden closed his speech by telling the UConn students to reach for the stars.

He said they are the future of this country and he believes they can accomplish anything through hard work.