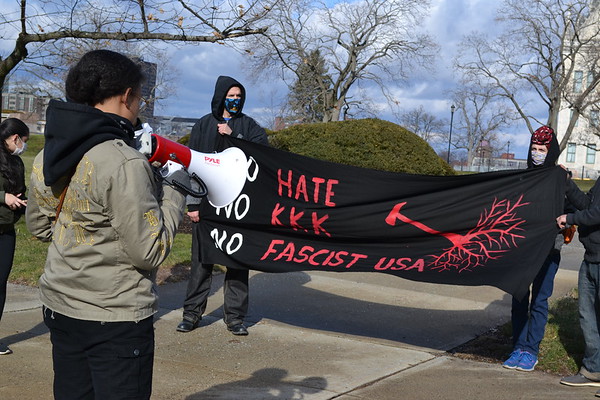 HARTFORD -- Despite warnings that all 50 state Capitols could be subject to unrest and violence in the days leading up to Joe Biden being sworn in as the country’s 46th president, Hartford was mostly quiet on Wednesday as the National Guard stood by a number of state buildings for extra security.

The only protestors at the Capitol -- about a dozen people -- turned up shortly before noon and said they were there to stand up to racism and fascism.

“White supremacy doesn’t end with Joe Biden, and it didn’t start with Donald Trump,” said Alicia Strong, an activist from New Britain. “As a Black woman in this country, I am never safe,” she continued, speaking through a megaphone in front of the Capitol building.

Strong also noted that there were not any supporters of Trump in sight.

“They scared, but we are strong,” she said. “We recognize that the government hasn’t done [expletive] for us.”

The Capitol in recent days has been on high alert after the FBI received information indicating violent protests could be coming for all 50 Capitols as Biden was set to take office this week. Members of the National Guard, armed with long guns and standing by Humvees, stood guard at a number of state buildings in downtown Hartford on Wednesday. They occasionally patrolled the area, traveling in pairs.

Capitol Police also had a high visibility in the downtown area, and two sets of metal barricades were set up around the State Capitol Building. A sign outside the entrance to the building said the grounds were closed.

Around 12:30 p.m. -- about half an hour after Biden was sworn in as president -- Hartford Lt. Aaron Boisvert said officers from his department had not been called to the Capitol to provide any kind of assistance.

Those who had gathered at the Capitol held signs that read things like “No hate” and “No KKK.”

Al Mayo, one of the protestors, said he refused to stay home despite receiving warnings that it may not have been safe because of the possibility of armed Trump supporters.