'Continuing to have a prevention over reaction approach': National Guard, police prepared for potential unrest at State Capitol 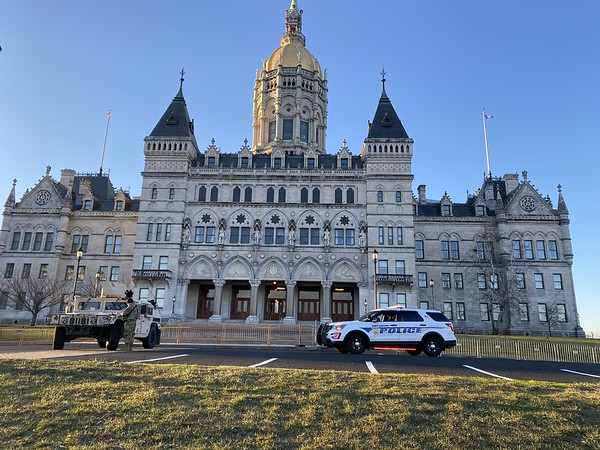 HARTFORD -- Authorities are closely monitoring the possibility of unrest at the Capitol in Hartford Wednesday ahead of the presidential inauguration, though no credible threat has presented itself thus far.

This has been the national trend since it was reported last week that the FBI received information indicating armed protests were being planned at all 50 state capitols in the days leading up to President-elect Joe Biden being sworn in.

Brian Foley, formerly of the Hartford Police Department who now works for the state’s Department of Emergency Services and Public Protection, said in the afternoon hours Tuesday that authorities knew of no specific, credible threat in Connecticut.

"Public safety is our greatest priority,” Foley said. “At this time, there are no specific credible threats in Connecticut. The Department of Emergency Services and Public Protection continues to gather intelligence, while monitoring intelligence both locally and nationally. The Division of Emergency Management and Homeland Security, as well as CTIC, are active.”

According to Foley, they have been in constant contact with local state and federal partners.

“Capitol police, along with state troopers and Hartford officers, were ready for the possibility of violent protests Sunday at the Capitol Building, Boisvert said. “Nothing happened.”

With the exception of a few counter protestors showing up Sunday, things were very quiet.

The Connecticut National Guard last week said it would be providing Capitol Police and other law enforcement agencies assistance in the coming days.

“The Connecticut National Guard is committed to the protection of life, property, and the Constitutional right to peaceful protest,” the agency said in a statement. “Due to operational security considerations, further details such as numbers, locations, unit designations, and operational details will not be provided.”

State police on Sunday shared a photo of the Capitol Building in Hartford and encouraged anyone who may “see something” to “say something” by using the state’s Division of Emergency Management and Homeland Security’s tip hotline at 1-866-HLS-TIPS or by emailing the Connecticut Intelligence Center at CTIC@ct.gov.

Meanwhile, Capitol Police on Monday said they are monitoring events around the nation and “continuing to have a prevention over reaction approach.”

“SCPD along with numerous agencies will continue our high level of awareness and diligence to assure the protection and safety of anyone who comes to the Capitol complex,” Capitol Police said via their Twitter account.

Capitol Police are responsible for a 17-acre campus in downtown Hartford that includes the State Capitol and Legislative Office buildings, as well as garages, supporting state offices and the Old State House.

Authorities being on high alert follows supporters of President Donald Trump storming the U.S. Capitol on Jan. 6 as Congress was set to confirm Biden’s victory in the presidential election. The incident left five people dead, including a police officer.

Boisvert said Hartford officers will be ready if police at the state Capitol need them.

“Obviously if they need us we’ll be there,” he said. “We’ll have extra officers on staff if we need them.”

Boisvert said Hartford police are also maintaining contact with the FBI and state police leading up to the presidential inauguration -- which is expected to begin around 11 a.m. in Washington, D.C.