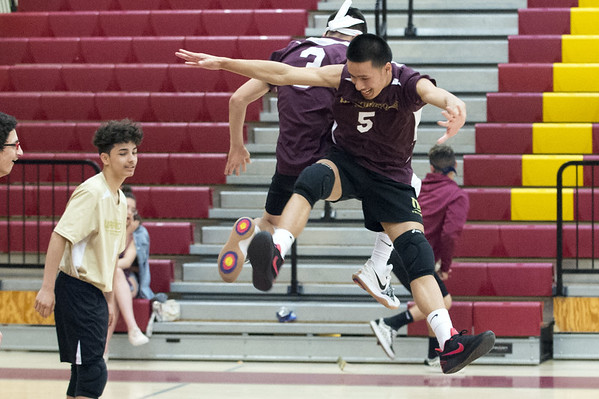 New Britain's Randy Slart, front, jumps in the air along with Giovany Hernandez before the beginning of Monday's match against Simsbury | Wesley Bunnell | Staff Buy this photo
Published on Tuesday, 21 May 2019 17:57
Written by RYAN CHICHESTER

NEW BRITAIN - Aside from the scoreboard hanging above the door heading into the New Britain boys volleyball team’s locker room, there was no telling the Hurricanes had just been swept for the fifth time in a row.

New Britain, after completing its first-ever season with a 3-0 loss to Simsbury on Monday, huddled behind closed doors to share a raucous applause to commemorate what the team had just accomplished together. The achievement couldn’t be seen by the Hurricanes’ record, but given how they played in the final match of the season compared to the first, there was plenty of reason for celebration.

“If we only started the season like we are playing right now,” head coach Michelle Abraham said. “We were at such a disadvantage, and just what they’ve learned is tremendous. Kudos to them. None of them quit. The guys we started with are the guys we finished with.”

Perhaps that is the true source of New Britain’s postgame celebration. Not only did the program improve throughout its inaugural campaign, but it endured all the trials that come with starting a team from scratch, and that resolve remained through the final set of the year.

“It’s about the experience,” senior Randy Slart said. “I wasn’t focused on the record, whether it was a losing or a winning one. I was having fun with these guys, and that’s what I was worried about.”

Of course, it wasn’t all fun, at least not all the time. It took New Britain more than a month to record its first-ever win, but the bumps along the way made the triumphs even more meaningful for those who signed on to endure the struggles of being a part of Ground Zero at a program that existed only in theory months prior.

“At the beginning it was really tough for us,” Slart said. “But looking back, we improved a lot and adjusted. It’s been a blessing. I’m proud I had the chance to play with these guys.”

Abraham knows all about building a new program and the challenges that come along with it. It took some convincing to bring her along through this first season to try and replicate what she’s done with the girls volleyball program, but now that she hopped on board, she doesn’t want to get off.

“I’ve never coached a boys team and their whole demeanor is so different,” Abraham explained. “I was very apprehensive about it at the beginning of the season, but I have to say it’s been one of my rewarding years of coaching. Even above winning the state championship with the girls. They are a joy to be around. They didn’t let things bother them. They bounced back and believed they could win every single night.”

Even for seniors like Slart and Bryan Rodriguez, who won’t have a chance to see how the team continues to improve in 2020, the experience was worth the growing pains through the season.

“We had a blast playing for this team,” Rodriguez said. “I had a lot of fun. It meant a lot.”

The rest of the team enjoyed the ride as well. So much so that they don’t want it to come to a stop just set. The season is over, but the work continues. After experiencing the reward of working to start something of their own, the Hurricanes want to continue working, even if their last regular season match has already concluded. Like the program itself, they see it as just getting started.

Ryan Chichester can be reached at (860) 801-5094 or rchichester@newbritainherald.com