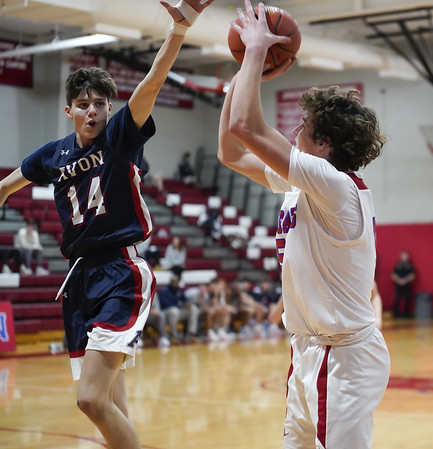 The New Britain Golden Hurricanes (3-4) failed to make it three-in-a-row on Tuesday when they fell on the road to East Hartford 59-57. Jackson Forte paced the Canes with 16 points and Dontay Bishop logged 14. New Britain is back at home on Friday to host Windsor at 6:45 p.m.

The Berlin Redcoats (2-6) logged their second win on the season on Tuesday night when they hosted the Avon Falcons at Coach V Court. The Redcoats and Falcons took things down to the final seconds when senior Zach Skinner sunk the game-winning free throw for Berlin. Skinner scored 10, but the Redcoats were led by River Eberhardt’s 22 points in the win. They’ll be back at home on Thursday hosting the Plainville Blue Devils at 6:45 p.m.

The Newington Nor’easters (5-3) suffered their biggest loss of the season on Tuesday when they visited Bloomfield. The Nor’easters had only lost by a combined seven points in their first two losses. They’re back at it Thursday for the second leg of a three-game road stretch. The Nor’easters will visit Hartford Public at 6:45 p.m.

The Southington Blue Knights (6-2) find themselves on the road through the first few weeks of January and also suffered their worst loss to this point on Tuesday. On a visit to West Hartford and the Conard Red Wolves, Southington dropped their second game of the season. They’ve got two road games ahead of them before being at home in seven of their last 10 to end the season. Southington will head to Farmington Thursday at 6:45 p.m.

After losing four of their first five, the Plainville Blue Devils (3-5) have won two-straight taking them into an area matchup with Berlin on Thursday. The most recent Plainville win came on the road Monday at Goodwin Tech. They draw the Redcoats next with both sides looking to build on recent wins.

The New Britain Lady Canes (5-3) have alternated results over their last six games including their most recent 43-26 loss at RHAM. The Golden Hurricanes will head to Windsor on Thursday with eyes on getting back on track and beginning to build momentum.

The Berlin Redcoats (3-6) lost at home on Monday against the neighboring Newington Nor’easters (7-2). Emma Ellison and Brooke Walker led Berlin with 11 and nine points respectively in the loss. The Redcoats will go to Plainville Thursday for a 6:45 p.m. tip.

The Nor’easters were paced by Bela Cucuta with 23 points in the win over Berlin. Kendall Miller fell just behind her counterpart with 17. Newington will be back at home on Thursday to host Hartford Public at 6 p.m.

The Southington Blue Knights (4-5) dropped their second-straight on Monday at Enfield. The Knights will settle back into things at home where they’ll play the next four games. Southington will host Farmington at 6:45 p.m. on Thursday to kick off that stretch.

The Plainville Blue Devils (1-8) have been struggling to generate offense over a four-game losing skid, including in the loss at home to Rocky Hill Tuesday. They get Berlin at home on Thursday at 6:45 p.m.